For those not familiar with the vicissitudes of Northern Ireland, Kenneth Branagh's 2021 film Belfast may not give one a full idea of the terrible things that happened there over a period of three decades - euphemistically known as 'the Troubles'. Many died in a war of colonial origins involving Irish nationalists, Protestant loyalists and unionists, and the direct involvement of the British Army and Government.

However, that was then and this is now. A quieter, slowly changing, more peaceful air hangs over Northern Ireland since 2005 when the IRA announced the end of its armed campaign.

Despite some flare-ups, the peace is holding and hopefully creating the conditions for a better tempered mutual understanding of two communities that underwent so much division for so long. Branagh's film sits neatly into that crevice, arguing for a basic human understanding and empathy, to encourage unity and mutual acceptance.

Brannagh's Oscar-winning screenplay (seven nominations at the 94th Academy Awards, winning for Best Original Screenplay) tells the story of nine-year-old Buddy from a working-class Ulster Protestant family. He lives on a terraced street of mixed Protestant and Catholic families who all know each other well and get on with each other well. A group of Protestant loyalists attack the homes and businesses of the Catholics, as well as putting pressure on Buddy's father to participate in the violent sectarianism, which he refuses to do. Buddy becomes very attracted to a fellow high-achieving Catholic classmate, Catherine, and they become friends. Buddy's father works in England and comes home as regularly as he can while his wife struggles with their accrued debts.

Brannagh's story avoids sectarian rhetoric and shows us that the Catholics and Protestants had much in common, such as their working-class struggles with poverty and emigration.

Apart from historical differences of origin, and Unionist politics notwithstanding, the people had much in common culturally to unite them. Throughout Irish history since the 18th century Protestants have been leaders of movements that emphasised British heritage, as well as movements that asserted Irish identity. These similarities have created confusion even amongst the people themselves, as the visual differences between Catholic and Protestant are not obvious in Ireland.

Thus, Buddy tries to figure out the differences between the sorts of names and spellings Catholics use as distinct from Protestants. One example of naming traditions stands out from recent history - the TV debate between Mr Ken Maginnis (the Ulster Unionist security spokesman) and Mr Martin McGuinness (Sinn Fein's senior negotiator), as reported in the Irish Times in 1997.

The debate highlighted the similarities as much as the differences between two politicians who used different spelling versions of the same name (Mac Aonghusa). (The name, Aonghus (One Strength), resulted in not one, but two famous drinks, the other being Hennessy's brandy (the O'hAonghusas). Both Maginnis and McGuinness are formed from the colonial phonetics of a coloniser who could not speak Gaelic, confronted with the colonised who could not read or write. They simply wrote down what they heard, often accurately recording the local accents. Over time the names became shibboleths for different sets of ideas, both names being determined by the coloniser.

Although descendants of colonists who arrived from Britain in the early 17th century, by the 18th century many Protestants had, in the words of Albert Memmi's famous theory of the 'coloniser who refuses', formed the Irish Volunteers (local militias) in Ireland in 1778. The Volunteers were made up of Anglican Protestants, Presbyterians and a limited number of Catholics. Taking advantage of the British preoccupation with the American Revolutionary War, the Volunteers paraded fully armed and demanded an end to the tariffs that Irish goods had been subject to upon entering Britain (unlike British goods which could be imported freely into Ireland). Many of the Volunteers were concerned with "securing Irish free trade and opposing English governmental interference in Ireland. This resulted in them pledging support for resolutions advocating legislative independence for Ireland whilst proclaiming their loyalty to the British Crown." 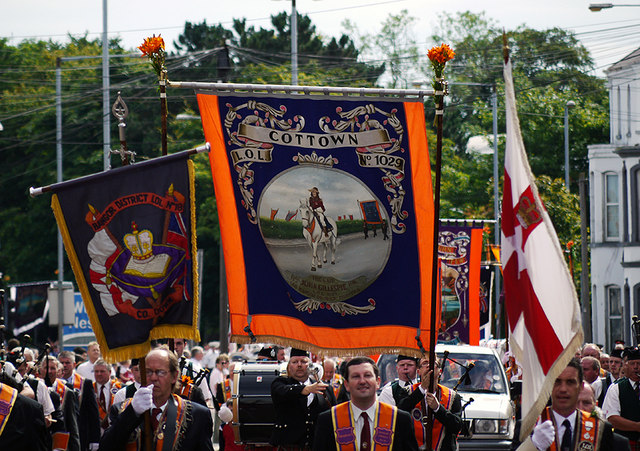 Orangemen marching in Bangor on the Twelfth of July 2010
In the pre-partioned Ireland of the 19th century many Protestants were nationalists. For example, the Irish nationalist Thomas Davis was well known for a doctrine of nationality that he propagated through the newspaper, The Nation, of which he was one of the founders. He described his tenets as "a nationality that would embrace all creeds, races and classes within the island [...] which would establish internal union and external independence". As a Protestant of mixed English and Anglo-Irish parentage, his nationalist views and writings put him into conflict with the colonial strategies of the empire. By proclaiming the slogan "gan teanga, gan tír" (no language, no nation) he tried to redress some of the worst effects of colonial policies.
Indeed, the six counties of Northern Ireland had communities of Irish speakers. The census figures of 1851 and 1891 demonstrated the presence of Irish-speakers respectively as follows: Antrim 3,033 (1.2%) and 885 (0.4%); Armagh 13,736 (7.0%) and 3,486 (2.4%); Derry 5,406 (2.8%) and 2,723 (1,8%); Down 1,153 (0.4%) and 590 (0.3%); Fermanagh 2,704 (2.3%) and 561 (0.8%) and Tyrone 12,892 (5.0%) 6,687 (3.9%). There were minor Gaeltachtaí (Irish-language communities) in Tyrone, the Sperrins (Derry), the Antrim Glens and Rathlin Island that had all but died out by the 1940s.

In the aftermath of the 1916 Easter Rising many of the revolutionaries were interned in a camp at Frongoch in Merionethshire, Wales. There were some Protestant internees, such as Arthur Shields, Harry Nichols and Ellett Elmes (Dublin); Sam Ruttle (Tralee and Kildare) and Alf Cotton (Tralee and Belfast) whose background in the Volunteers, Citizen Army and Conradh na Gaeilge demonstrated the non-sectarian outlook of the revolutionary movement.

The first president of Ireland, Douglas Hyde (1863-1949), was the son of a Church of Ireland (Anglican) minister and had been influenced by nationalist circles while studying for a Doctorate of Laws in Trinity College. However, it was his speech "The Necessity for De-Anglicising Ireland" in 1892 that heralded a qualitative change in the struggle to maintain and develop the popular basis of support for the Irish language. Hyde elaborated on his call for de-Anglicisation, which he emphasised, was not conceived out of Anglophobia:

"When we speak of 'The Necessity for De-Anglicising the Irish Nation' we mean it, not as a protest against imitating what is best in the English people, for that would be absurd, but rather to show the folly of neglecting what is Irish, and hastening to adopt, pell-mell, and indiscriminately, everything that is English, simply because it is English."

Maybe because of his Church of Ireland background, Douglas Hyde stayed away from direct involvement in politics but had he been alive he would have most likely supported the Good Friday Agreement (GFA), signed on 10 April 1998 which established in law basic principles such as:

"The British government would uphold the right of the people of Northern Ireland to decide between the Union with Great Britain or a united Ireland.
The people of the island of Ireland, North and South, had the exclusive right to solve the issues between North and South by mutual consent.
The Irish government would try to address unionist fears of a united Ireland by amending the Irish Constitution according to the principle of consent."

In other words, there would be no change to the status of Northern Ireland without the express consent of the people.

On 28 July 2005, the IRA announced the end of its campaign, and promised complete decommissioning of all its weapons, to be witnessed by clergymen from Catholic and Protestant churches. 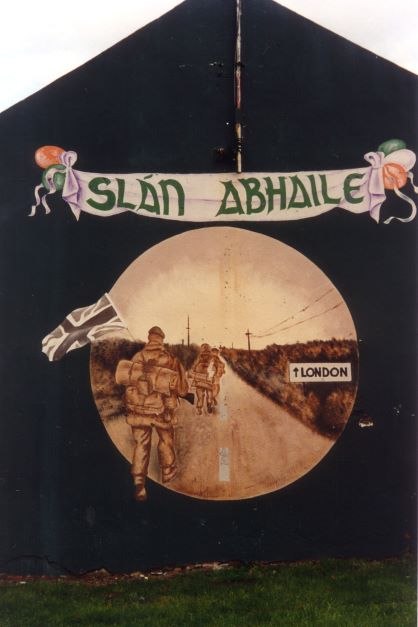 A republican mural in Belfast during the mid-1990s bidding "safe home" (Slán Abhaile) to British troops. Security normalisation was one of the key points of the Good Friday Agreement. (Jimmy Harris - Flickr) Mural in Beechfield street, Short Strand, Belfast, with the Gaelic text Slan Abhaile, taken 1995.
In 2007, the Democratic Unionist Party (DUP) agreed to share power with republican party Sinn Fein, and Paisley and McGuinness became First Minister and Deputy First Minister. McGuinness said after Paisley's death: "Our relationship confounded many. Of course, our political differences continued; his allegiance was to Britain and mine to Ireland. But we were able to work effectively together in the interests of all our people".

More recently Linda Ervine (whose brother-in-law is the former UVF commander and politician David Ervine) started the Turas Irish Language Project in east Belfast 10 years ago. She noted that the programme has gone from strength to strength as Protestant, loyalists and unionists in Belfast are learning the Irish language in increasing numbers.

Whatever the decisions the Protestant people make about their future in the UK or a united Ireland the cultural similarities born of sharing the same place will remain of utmost importance. Ervine notes:

"I think what was interesting at the time - now this was 11 years ago - the Protestant women were really intrigued, because we'd never had the opportunity, and the Catholic women were much more interested in the royal wedding that was coming up and what Kate's dress was going to look like."

Branagh's film Belfast is an important reminder that all our futures are dependent on what unites us rather than what divides us.

Caoimhghin Ó Croidheáin is an Irish artist, lecturer and writer. His artwork consists of paintings based on contemporary geopolitical themes as well as Irish history and cityscapes of Dublin. His blog of critical writing based on cinema, art and politics along with research on a database of Realist and Social Realist art from around the world can be viewed country by country here. Currently working on a book entitled Against Romanticism: From Enlightenment to Enfrightenment and the Culture of Slavery. It looks at philosophy, politics and the history of 10 different art forms arguing that Romanticism is dominating modern culture to the detriment of Enlightenment ideals.

Caoimhghin Ó Croidheáin is an Irish artist, lecturer and writer.