Jenny Farrell introduces Sergei Prokofiev’s “Peter and the Wolf”, one of the most famous pieces of music for children ever written

Sergei Sergeyevich Prokofiev is among the great composers of the 20th century. He was born 130 years ago, on 23rd April 1891 in Sontsovka in the Ukraine, into a rural family. Village life, with its peasant songs, left a permanent impression on him. His musical mother arranged trips to the opera in Moscow when he was a child. Prokofiev’s subsequent ten years of study (1904-1914) at the Petersburg Conservatory, under Rimsky-Korsakov among others, were a time of great artistic growth.

When the Tsar was overthrown in 1917, Prokofiev understood a new dawn had broken and he wrote a vast quantity of new music. In the summer of 1917, he joined the Council of Workers in the Arts, a significant organisation in Russia’s left-wing artistic struggle. Stranded for nine months in the Caucasus due to the civil war, he could only return to Petrograd in early 1918. Believing that music was not to the forefront of the Council’s activities, Prokofiev obtained official sanction to undertake a concert tour abroad.

From 1918, he began touring the USA and Europe as a pianist and conductor and stayed out of the country longer than originally intended, largely due to the blockade of the USSR. He stayed in  the US for almost two years and returned there on several occasions for concert tours. In France, Prokofiev came into close contact with avant-garde musical developments, an interest he had had from early on. He had already performed pieces by Schönberg in Russia. Prokofiev’s musical talent developed rapidly. He studied the works of Stravinsky, particularly the early ballets, but maintained a critical attitude toward his countryman’s innovations, with whom he had a strained personal relationship. From 1922, Prokofiev spent over a year and a half in Ettal, Bavaria, before returning to Paris. In Germany, Prokofiev married the Spanish-born singer Carolina Codina, whom he had met in the US and with whom he went on to have two sons.

Prokofiev toured the USSR several times in the late 1920s and early 1930s. In 1936 he finally returned to his homeland with his family, where he became active in the Composers’ Union. Having met writer and translator Mira Mendelson in 1938, he left Carolina in 1941 and married Mira in 1948. Carolina Codina was arrested for ‘espionage’ shortly after this, sentenced to 20 years in labour camps and released in 1956. Yuri Andropov facilitated her departure from the Soviet Union in 1974.

Prokofiev was attracted by the work of modernist Russian poets, by the paintings of the Russian followers of Cézanne and Picasso, the theatrical ideas of Meyerhold. In 1914, Prokofiev had met the great ballet impresario Diaghilev, who became his mentor for the next decade and a half. All these influences impacted on Prokofiev’s compositions while he lived abroad. Yet, Prokofiev had not lost touch with the music of his homeland and his ties to it had never been severed. This return home resulted his composing in numerous masterpieces.

Peter and the Wolf

One of these, the most famous of all, is Peter and the Wolf. Natalya Sats, then director of the Moscow Musical Theatre for Children, had commissioned this piece to introduce children to some of the instruments of the orchestra, and classical music. Prokofiev had met Sats while taking his sons to her theatre in 1936. Prokofiev wrote a draft for the piano in a few days, finishing the orchestration 9 days later, on 24 April. The piece was performed to great acclaim, with Sats narrating, at the Pioneer Palace in Moscow. Prokofiev later said: “In Russia today there is a great emphasis on the musical education of children. One of my orchestral pieces (Peter and the Wolf) was an experiment. Children get an impression of several instruments of the orchestra just by hearing the piece performed.”

Prokofiev himself wrote the story, which is narrated by a speaker. First, the narrator introduces the characters with their musical motifs. In the course of the story, the narrator explains what is happening. If you know which instrument belongs to which animal, the music speaks for itself.

All the people and animals in the story are played on different instruments:

Peter is represented by strings (including violins, violas and cellos), sweet, clear sound. Their light, high sound describes Peter as a happy and outgoing boy.

The bird is characterised by the flute, fluttery, happy chirping.

The slightly nasal sound of the oboe suggests the quacking, waddling duck.

The soft, warm sound of the clarinet evokes the velvety, elegant and sneaky cat.

No instrument is better suited to the slow grandfather, than the dark, thick low register of the bassoon.

The wolf is conjured by three French horns. He is dangerous and lives in the forest; the French horn with its large and deep sound suggests this perfectly. 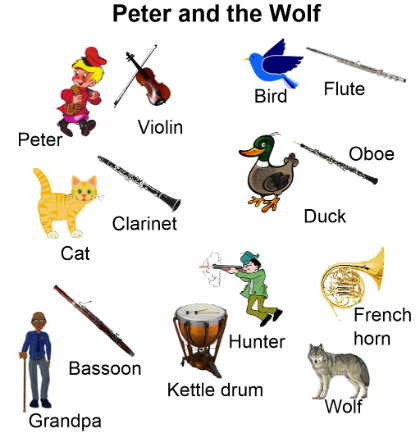 Peter who lives with his grandfather on the edge of a forest, understands the language of the cat, the bird and the duck. The animals are his friends. One day, the wolf emerges from the forest and devours the duck in one gulp. Peter devises a plan to catch the wolf with the help of the bird.

We hear about Peter’s love for animals, grandfather’s worries, about birds arguing whether they should swim or fly, about the cat’s unsuccessful pursuit of the bird, about the arrival of the wicked wolf, and finally, how the bird and Peter catch the wolf, and everybody’s triumphal procession to the zoo.

The story begins on morning is calm and sunny, upward moving leaps in the melody, Peter’s strings play a happy tune, there are upward leaps, the flutes (bird) trill. When the birds argue, the mood becomes louder and discordant, with a back and forth between the instruments. As the wolf appears, chases, and catches the duck, the mood conveyed by the music becomes alarming, threatening, the rhythm becomes faster and the oboe (duck) climbing in pitch with anxiety, discord ends in loud alarm. Following this crisis, Peter, and the bird attempt to catch the wolf with a lasso. The mood becomes anxious, a sense of breath being held as the music descends in pitch. Soft strings pause before the brass blares loudly. When the wolf is caught, it is taken to the zoo in a jubilant procession with all involved. The mood is happy and we hear trills, fast arpeggios on clarinet, strings, flutes and there is a sense of happy skipping.

This musical fairy tale is an example of socialist realism. It features a ‘group of heroes’, not an individual one. Peter and the bird need one another to defeat the wolf. Humanity and nature live in harmony. This is underscored musically. It is profoundly humanist: the adversary, the wolf, is not killed but put out of dangerous action and made available for educational purposes. There is an optimistic ending in that the wicked wolf is defeated but also that the duck seems to have survived in the wolf’s stomach. And all this is expressed in the music: The group hero idea while the wolf is captured, as well as in the tutti of all the themes in the procession to the zoo. And the duck’s survival in sounding a very muted duck theme at the end – from the wolf’s belly, as it were. 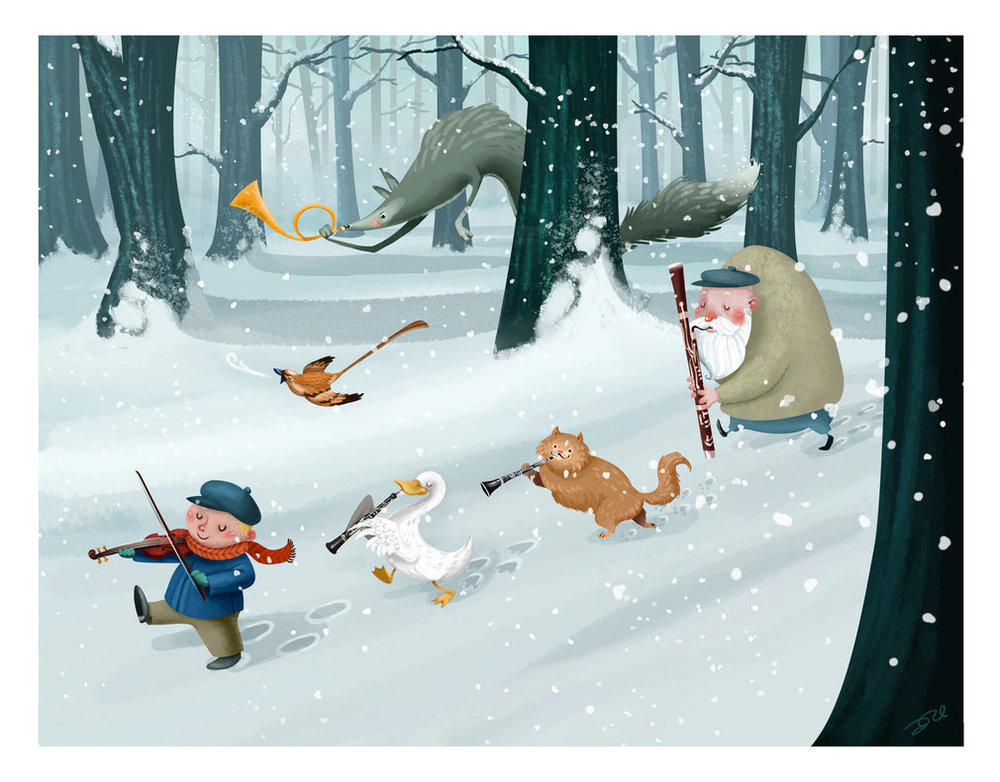 It is a happy ending indeed, celebrating friendship, courage and co-operation in the defeat of danger and evil.

Even if the haunting melodies seem simple at first glance, they are not. The musical story is vividly and beautifully interwoven, in word and sound, action and musical gesture, including many masterful tone paintings. Listeners learn that music can tell its own story, once you understand that themes can represent characters that are repeated initially until you get to know them. They then develop into variations. They can interact, they can struggle, they can harmonise. This wonderful introduction to understanding classical music is not didactic and it is not just for children. It is thoroughly memorable and enjoyable.

“Peter and the Wolf” remains Sergei Prokofiev’s best-known composition to this day.