The Robin Hood legend has certainly come under fire these days. The last studio big budget Robin with Russell Crowe had Robin himself as a Baron who saves England and guarantees it for the other barons. Indeed, as the Earth’s resources dwindle, we are watching the Robin Hood story in reverse. Lauded entrepreneurs and their merry band of tech stalwarts, bathed in green, hide their ever-increasing gains in tax shelters, which essentially rob the state and poor people who the taxes might help, and instead pay rich dividends to corporate board members. 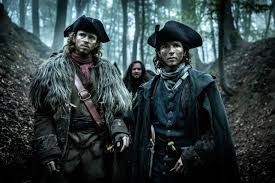 The legend is retold and made more complex in a Flemish series on Netflix called Thieves of the Wood. The Flemish title translates as The Band of Jan de Lichte, and it reminds us that Robin Hood legends appear everywhere there is mass inequality – which is everywhere. They are as prominent in the bandit tales of Italy as in their more modern echoes in the exploits of the James Gang and Bonnie and Clyde.

This 18th century tale takes place in Northern Belgium, in a small town near the major commercial city of Ghent. Jan de Lichte is a nobleman conscripted into the Prussian army to fight in the remote regions of Silesia. He deserts and returns home to find the town’s mayor has an expert scheme to improve the economy of the mayor and a small band of nobles. The town head is periodically exiling those who cannot pay their bills or who have committed petty crimes, and sending them to nearby woods, also populated by the town’s gypsies. Both parties are now barely allowed in and through the town gates. Under cover of a hypocritical morality – which applies to the poor but not to the nobles who hunt young girls for their sexual pleasure – the mayor is actually constructing a workforce of exiles who in order to survive will build the road he needs from his town to Ghent. The projected road will greatly improve trade in the town, with the profits again accruing to the nobles.

Pursued by Hessian bounty hunters, Jan takes up with a group in the woods and robs a carriage bound for Ghent filled with gold – but with a modern twist, because the carriage is also filled with drugs, opium the nobles are transporting in league with local gangsters, who also traffic in women. There is a Maid Marian, a printer’s daughter who initially comes to live with Jan in the woods, but is then appalled at his part in the death of her brother, and returns to the city where she is chastised and beaten with glee by the local prelate. He is in league with the mayor and exuberantly reinforces the local power structure, as he sadistically tortures Jan’s lover for consorting with the Devil – that is, those opposed to the ruling elite.

The series features an incredible resurrection – and will need another one if it is to continue for a second season. The most complex character is the Sheriff of Nottingham-like bailiff. He at first finds the nobles’ conduct appalling, with their slave-trade enterprise and their false conviction and execution of a family blamed for the carriage theft. Finally, though, he succumbs to the generalized air of corruption that pervades the town, and becomes himself an enforcer of the hypocrisy he so clearly sees through.

American critics, some of whom now reduce the act of evaluation to “Stream It or Skip It,” generally found this series “too complicated” and not worth bothering with. But it’s the complication, the confluence of forces (government, merchants, church and gangsters) that together describe the pattern of power in the town and that gives this series its meaning.

There is a pitiful contrast between the small clique of nobles whose sign of power is their ugly and pretentious wigs, and the town’s poor, reduced to slave labour and a subsistence existence in the woods, clothed in tattered garments. One could think of cities like Los Angeles with its homeless tent cities under the bridges in smog-filled areas, and with more and more ordinary workers struggling to keep their apartments – that is, not to be consigned to the woods. Even outlying regions of housing such as trailer parks are now being bought up as a sound investment by distant and global hedge fund managers, who quickly jack up the rent. On the other side, the city’s elite wall themselves off in mansions and gated areas where the air is clear, and wear not wigs but the latest Armani suits and Dior dresses.

The series meanders a bit through several episodes before anything like a merry band appears and robs the rich, and it ends on a very down note, as many of the resisters in the woods are slaughtered. The complications though between this version of the Robin Hood myth and earlier more pristine versions represents the difficulties in the neoliberal era of a clear-cut path to opposing accumulated wealth and greed. 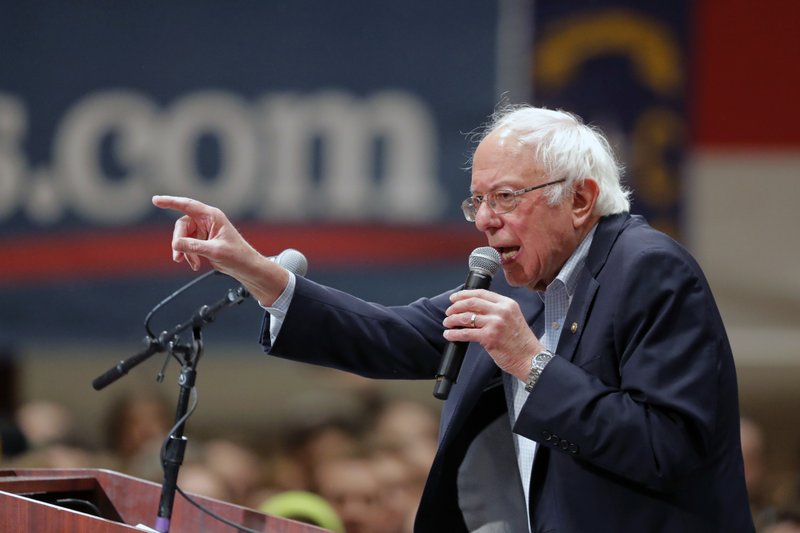 For example, look at Bernie Sanders’ problems on the campaign trail, as his candidacy attempts to appropriate even just a bit from the rich to spread the wealth throughout the country. Like Jan de Lichte he is opposed by a confluence of corporate, political party, government and media forces. The complications in the show are messy but overall they succeed in presenting a resounding, modern-day Robin Hood. 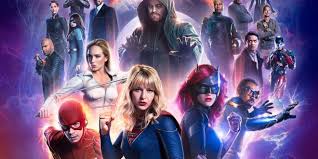 The CW television network recently ran Crisis on Infinite Earths. It’s a five-part saga that ran across five different series over two months in what is called the Arrowverse. It springs from the original Greg Berlanti series Arrow and links all of the DC comic series Berlanti has had a hand in creating – Arrow, Supergirl, The Flash, Legends of Tomorrow and the most recent Batwoman. The CW itself is part of the corporate universe of CBS/Viacom and Time Warner/ATT&T.

Rather than ground their costumed heroes in a more socially embedded world, like their rival Marvel, DC instead multiplies and morphs the characters, with more extravagant costumes, different dimensions and alien worlds. Here there are 99 earths, all with their own version of the various superheroes – and all but one destroyed in the course of this epic. 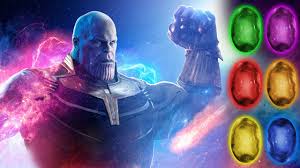 Just like Marvel though in its two-part concluding Avengers film, much time is taken up with the various villains and heroes collecting trophies as part of their task. In The Avengers: Infinity War the infinity stones are gathered first by the villain Thanos and then used for the ultimate prize, to destroy the world. In the second film, Avengers: Endgame they are recollected by the heroes in order to restore the world. In the DC version, a central aspect of the plot centers around the naming and assembling of the seven Paragons who collectively defeat the ultimate villain, the anti-Monitor. Having so much of the plot taken up with performing tasks to accumulate rewards which lead to some ultimate victory clarifies the way superhero narrative and gaming continue to be reciprocal and embedded in one another.

On the gaming side, that premise is being challenged by ever more complicated plots and characters, e.g Castlevania, The Witcher, which also then become TV series. On the film and television narrative side, along with adapting popular games like Resident Evil and the Sonic the Hedgehog, stories are now being constructed along gaming lines, not so much about the who, what, when, where, and how as about the process of zapping enemies and accumulating prizes.

The adoption of more complex narratives and characters may be a boon for gaming, investing that industry with more intellectual credibility, but it diminishes the narrative quality of film and television, as plots become little more than flashy costumes with limited character attributes forever in quest of accumulating sparkly awards that lead to the demise of an opponent. We are watching the degradation of the emotional impact of a narrative even as we witness the deterioration of our societies, as more wealth and power accrues to the 1 percent and as real goods and services (education, health care, housing) are priced out of our range.

We are left with only the pursuit of meaningless shiny objects, the products of an ever-expanding leisure industry whose prized commodities cater to the wealthy, with the trinkets of the industry available as compensation to those who cannot afford the goods they need. Unlike the heroes in DC’s Arrowverse, the collection of these “rewards” does not save the universe – it further impoverishes it.