David Betteridge notes how Remembrance Sunday at least marks the huge cost paid by the enforced many, not the few

Watching the ceremony from The Cenotaph on TV this morning was an experience of mixed thoughts and mixed emotions. The huge scale of warfare in present and past times, and on a global scale, was well highlighted by the programme, and the huge cost, paid by the enforced many, not the few. Also highlighted was the central role played by, and given honour to, royal and political elites. There they were at The Cenotaph, some in military uniform, some guilty of, or complicit in, or condoning of war crimes, their faces standing properly to attention.

Sadness was there, of course, especially among veterans, remembering and honouring the dead and the ruined and the bereaved, who, of course, include millions of those on the “enemy side” and in “civvy street”. After the two minutes silence, and the wreath-laying, we were treated to the spectacle of the march past and the taking of the salute. Flags and red poppies were to the fore, in profusion, dominating the scene!

How I wanted to see or hear the voice of “No More War”, or at least some hint that the next war was not being legitimised or consoled beforehand. Some of us on the Left may be pacifists, some may see a justification for armed self-defence, or for wars of liberation, but few of us want, I guess, the sort of ceremony that we see each year from The Cenotaph: homogenised and packaged in such a way that it seems as much a glorying in military power and presumed “national unity” as a questioning.

White poppies, of course, have stood as a symbol for the sort of thinking and feeling I am trying to express here, ever since the Co-operative Women’s Guild first produced and sold them in 1933. Similar thinking and feeling is to be found in a red poppy mosaic by the Clydebank photographer and archivist artist, Owen McGuigan. See “The Pity of War” on this website, where that mosaic and the process of making it are examined in depth. Under Owen’s hands, the red poppy of Armistice Day is deconstructed into the blood and dirt and grief and waste and futility that is essential to all wars. He called his mosaic “100 Years”.

As a footnote to that article, “The Pity of War”, I would like readers of Culture Matters to see the mock-up that Owen made for “100 Years”. He wanted to test how well he could stick the pieces of the mosaic down on a board, and how long they would be sure to stay in place.

See below, where the basic design elements of the larger mosaic are experimented with. To me, this mock-up is a very fine little work of art in its own right. 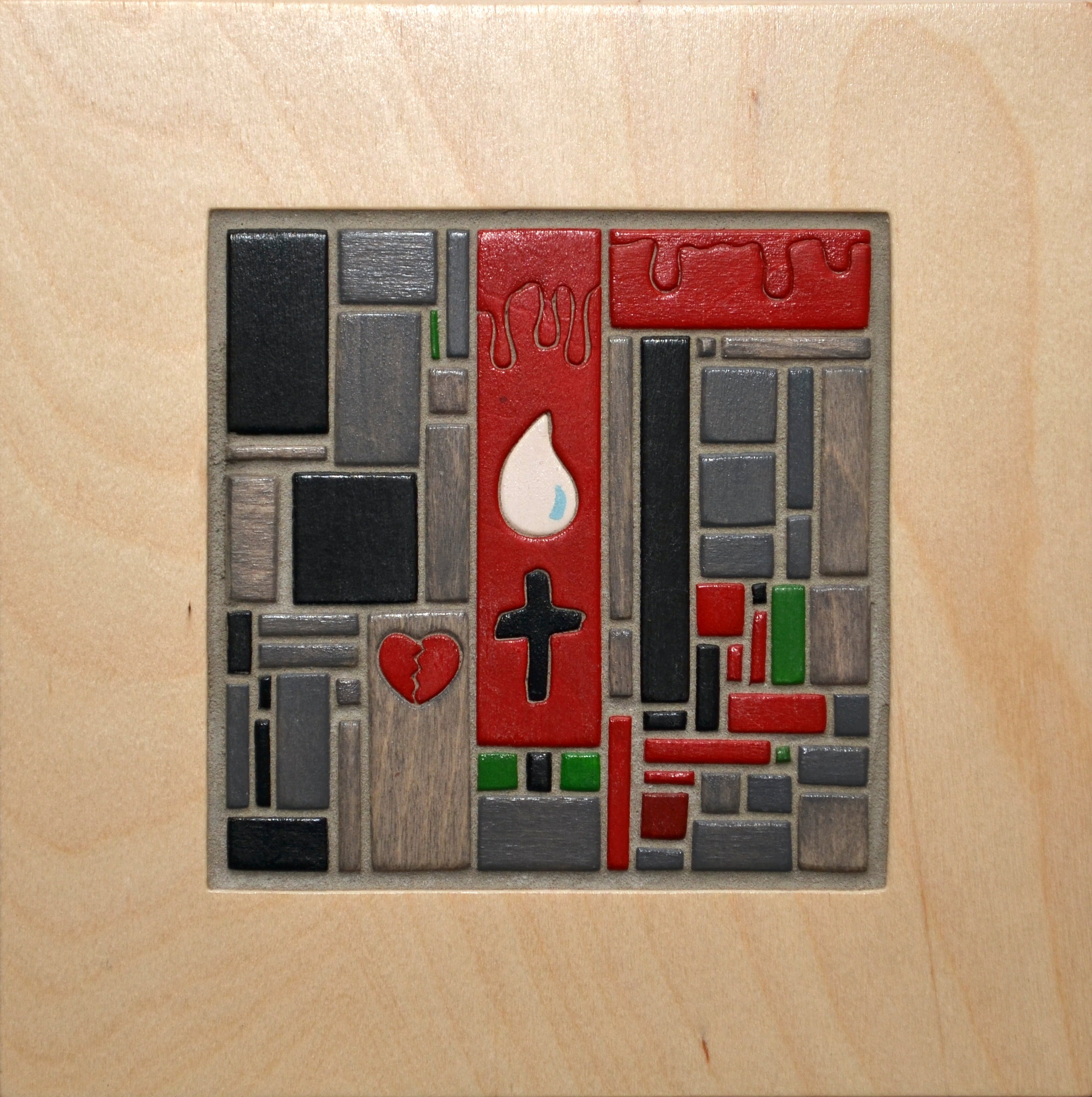 Note by the artist, Owen McGuigan:

While I was working on the “100 Years” mosaic, it occurred to me that I should make a test piece, because, thinking ahead, I knew that the mosaic would be grouted with light grey floor tile grout when it was finished. I wasn’t sure how the grout would react with the plywood shapes, and I didn’t want to ruin the mosaic after all the time and effort I had put into it. Hence, the creation of “Blood, Tears, Death & a Broken Heart” (shown above), which incorporates the main elements of the large piece, mounted in a birch plywood frame.

I finished this piece seven months before grouting the “100 Years” mosaic, and displayed it at an art exhibition, and in a craft shop, to see how it would react to different environments. Fortunately, it was very stable with no reaction.