Tomás Mac Síomóin has died on the eve of his 84th birthday. He was a significant Irish language writer, poet, publisher, scientist, and Marxist. A former editor of the Irish language and weekly newspaper Anois and later for the monthly magazine Comhar, he published four collections of poetry before embarking on prose fiction writing. His sardonic Cín Lae Seangáin [An Ant's Diary] (2005), won first prize in the 2005 Oireachtas short story competition.

Mac Síomóin was one of the finest Irish language novel writers of the late 20th/early 21st century. His novel An Tionscadal won the highest award for an Irish language piece of literature in 2007. In an effort to bring to the non-Irish speaking public the work of the outstanding poet Máirtín Ó Direáin, Mac Síomóin along with Douglas Sealy translated his work into English, published as Selected poems/Tacar dánta (1984). We have presented his work before in Culture Matters.

Among his outstanding achievements are the republication for the first time since their original edition outside Ireland and subsequent banning in Ireland of three of Liam O’Flaherty’s five novels placed on the index. Apart from this, Tomás Mac Síomóin wrote two studies on the cultural conquest of Ireland by Britain and more recently Anglo-American cultural domination, following in the footsteps of Frantz Fanon and Ngũgĩ wa Thiong'o, applying and developing their thinking in the Irish context.

Mac Síomóin wrote tirelessly, exposing neoliberal society and its profoundly inhuman nature in both fact anf fiction, often in a very satiricalway. His internationalism found expression, among other things, in his indefatigable translation work into and out of Irish, English, Catalan, Spanish. Among his outstanding translations into Irish are Juan Rulfo's classic Pedro Páramo and the selected poems of Marxist priest Ernesto Cardenal. He also translated The Communist Manifesto into Irish.

Being ostracised in Ireland for his outspoken anti-establishment views, Mac Síomóin made Spain his home in 1998. There follows a review of his last book, From One Bright Island Flown, published only last month. 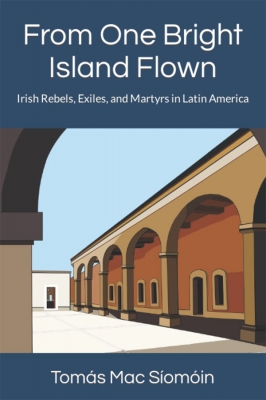 The defeat of the Gaelic Irish, supported by Spanish forces, at the Battle of Kinsale in 1601, was the final blow in the English conquest of Ireland and  a watershed in Irish history. Following this, a great number of the aristocratic and military leaders of Gaelic Ireland fled the country as the only alternative to submitting to criminalisation by the coloniser. This brought with it the rapid decline of the Gaelic society and culture, eventually leading to the near destruction of the Irish language.

The majority of those who emigrated went to Catholic countries, above all France and Spain, although they also went to other European countries such as Austro-Hungary to serve in their armies and become military and administrative advisors. The great Lament (keen) for Art O’Leary/ Caoineadh Airt Uí Laoghaire tells of the return of one such officer to Ireland, defying the British authorities and paying the ultimate price.

Tomás Mac Síomóin, who was one of the foremost Irish language writers and activists, has now published a book on the “Wild Geese”, as these emigrants are known. However, this is a book with a particular focus on the men who went, via France and Spain, to Latin America and became Latino heroes in their own right.

Typically, they initially went to Spain to study, work or join distinct military units in the Spanish army,  commanded by their own officers. Some travelled on to Spanish colonial countries in South America, in roles such as administrators, business people, military men. Frequently, the men integrated, and settled in their new homelands, indeed becoming involved in the fight for independence in these countries. A number became so famous, that their names known to this day. These are the stories Tomás Mac Síomóin tells, in by what he describes as 'an incomplete compendium'. Nevertheless, it is an encouragement to future researchers to look further into the lives of those in the Irish-Latin American hall of fame.

Mac Síomóin introduces the reader to six of these colourful lives.

Liam Lamport was born in Wexford in 1615, later became Guillén Lampart in Mexico, and wound up intriguingly as the inspiration behind Zorro, the fox. He is the only non-Mexican represented in statue at Mexico City’s Ángel de la Independencia.

Alejandro O’Reilly, too, has left a mark in present day Latin America – a street in Havana, Cuba, is named after him. Born in Moylough, County Galway, in 1722, his family fled the notorious Penal Laws and took him to Spain as a child. A military man, he was sent to Cuba by the Spanish crown in 1763, and from there continued his service to the Spanish monarch in Puerto Rico and Louisiana and back to Cuba and then Spain. Many other Irishmen are memorialised alongside him in this chapter.

Camila O’Gorman, on the other hand, was born in Argentina and suffered the same Catholic prejudice against women and those who opposed Catholic values, as so many women have done in Ireland. Aged twenty and eight months pregnant by her lover, Father Uladislao Gutiérrez, she was hounded and betrayed, and suffered the death penalty for living outside the iron rule.

The next chapter explores the story of a group hero (as did some of the early ones), the St. Patrick’s Battalion. Their deeds for Mexican independence are commemorated on a plaque at the San Jacinto Plaza in the district of San Ángel, Mexico City: “In memory of the Irish soldiers of the heroic St. Patrick’s Battalion, martyrs who gave their lives to the Mexican cause in the United States’ unjust invasion of 1847”.

The chapter on Eduardo Bulfin acquaints the reader with the background to the largest Irish migrant population outside the English-speaking world in Argentina, which of course includes the family that brought forth Che Guevara. In this chapter, however, Mac Síomóin focuses on a family that returned to Ireland only to take part in the Easter Rising. Both children of the family were actively involved in the Irish struggle for freedom. Eduardo, a Republican activist and Catalina, secretary to the Irish revolutionary, Austin Stack.

This small collection of outstanding Irish people with a Latin American connection concludes with the story of Rodolfo Walsh, another Argentine-Irishman, who saved the Cuban revolution. Rudolfo was a founder of Prensa Latina in Havana. He famously cracked the secret code which revealed the CIA’s intentions leading up to the Bay of Pigs. Consequently, Fidel Castro was able to defeat this assault on Cuban sovereignty.

Mac Síomóin points out that the book opens a window on a fascinating connection between Ireland and Latin America. Many more stories await their telling. Among them Daniel Florence O’Leary, aide-de-camp and chronicler of Simón Bolívar, the father of the Argentine navy, William Browne, and Bernardo O’Higgins, Liberator of Chile. Ireland’s loss of her Wild Geese was the Hispanic world’s gain.

Karen Dietrich’s beautiful illustrations complete the book’s purpose to reimagine the lives of those who took their sense of rebellion to the new continent.

The book is available here.